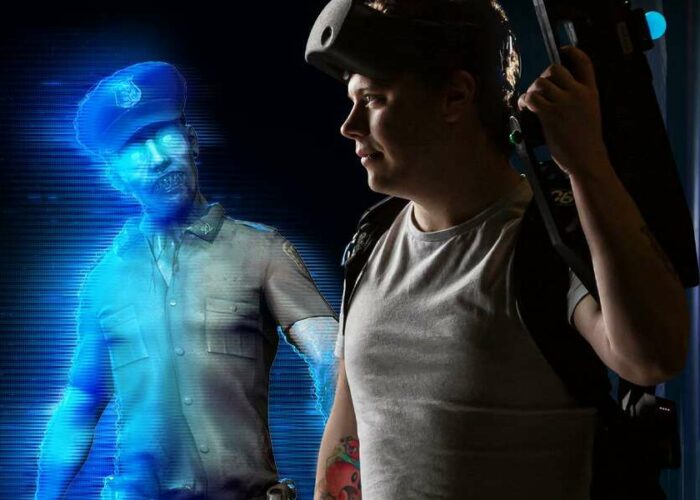 In another VR game, users ride rafts and use their handheld controllers to suck poison from plants in an effort to save the planet.

Zero Latency’s Australian location in Houston – which opened in 2019 – offers eight VR games that allow up to eight players to team up in challenges that vary in difficulty and fear factor.

In the open space the size of a tennis court, visitors wear high-tech gear and aren’t tethered to a computer, allowing for a much larger footprint than the lounge, says co-owner Chalayne Ainley.

“You have this big open space and it’s safe,” she says of the challenges guided by game masters who offer advice and help redirect guests if they navigate the farthest reaches of their VR world.

Players must be at least 4ft 6in tall for the equipment to fit properly.

Details: Recommended for ages 12 and up; $49 for 30 minutes of game time; zlhouston.com

Also: The Infinite, through February 20 at 2000 Edwards, Silver Street Studios, Sawyer Yards; 8 years and over; tickets from $17 for 8-12 year olds and from $36 for adults; theinfiniteexperience.world

It’s up to parents, Ainley adds, to decide if the VR experience is too realistic or if the scenarios will scare their child.

More than once, an adult has left a game, feeling overwhelmed by the immersive experience, she says.

The most teen-friendly offering lets players spend 15 minutes each in games called Engineerium and Mission Maybee.

In Engineerium, players solve problems and encourage each other through obstacles such as “climbing” a 90 degree wall.

Players know they’re standing flat on the ground, Ainley says, but the simulation and graphics make it difficult for teens and adults to take their first steps.

“It’s very surreal,” she says. “You have to convince yourself, ‘I can do this.’ It’s mind over matter… to overcome that mind-body connection.

The team cannot move forward until each member completes each challenge, another of which involves walking down a winding sidewalk that appears to descend into the ground. The effect is reminiscent of a Tim Burton movie, she says.

In the vibrant and bustling world of Mission Maybee, players use their controllers to precisely extract toxic substance from plants that have been infected by a mad scientist.

At the entrance to the facility, visitors strap on a backpack harness that contains a WiFi-operated computer. A headset allows them to hear the game’s special effects and talk to teammates and the game master. A camera inside the glasses places the player’s avatar in the VR world.

Zero Latency frequently hosts birthday parties for teenagers. Teams pose for photos in their gear before heading to zombie games, which Ainley says are the most popular for the age.

Most adult visitors also choose games that interact with the undead, she says.

“Most people want to come here and kill zombies,” she laughs.

Undead Arena is a futuristic gladiator-style event in which players are in a cage. Outbreak Origin tells a zombie origin story involving a deadly virus.

Other games imagine robots and androids on a space station or simulate an encounter with pirates.

A typical experience lasts 45-60 minutes, including an instructional briefing and 30 minutes of play time.

At the end of the graphics-heavy experience, it may take a while for the player to readapt to their real surroundings, Ainley says.

“Once you get in…you take your glasses off and generally feel a bit like a deer in the headlights. It’s a bit of a transition once they’re fully immersed.

VR fans might also enjoy The Infinite, a limited-time engagement at Sawyer Yards that invites players to experience life on the International Space Station.

Using hundreds of hours of real video footage taken aboard the ISS, the experiment began in Montreal before making its first US stopover in Space City.

As players navigate the ISS, they touch orbs that play video thumbnails in a self-paced 3D experience that lasts just over 60 minutes.

Allison Bagley is a Houston-based writer.