An true identity of the artist can be a slippery thing to pin down. Often, their mythology continues to evolve long after their death. Some even plan it that way. This is the case of Leonard Cohen, emblematic poet, singer-songwriter and collector of muses and trilby hats, whose work continues to proliferate six years after his death. “Hallelujah” is, of course, the song that launched a thousand covers. In October, there was the fiction collection A ballet of leperswhich features juvenilia written between 1956 and 1961 and covers many of Cohen’s known concerns: religion, death, depression, ecstasy, and female beauty.

This month, the Art Gallery of Ontario, or AGO, will launch Leonard Cohen: Everyone knows, a sprawling exhibit featuring more than 200 artifacts: books from Cohen’s personal library, letters, home movies, musical instruments and drawings, a tiny fraction of which have never been seen publicly. Much of the material was recovered from Los Angeles, where Cohen spent some of his final years, and is now in the custody of the Leonard Cohen Family Trust. For a life already excavated in depth, the exhibition has some surprises in store.

“These are things that, at first glance, you wouldn’t necessarily expect Cohen to be interested in. He was a poet and a romantic.”

One of Cohen’s most diligent biographers was himself, a fact that becomes clear when one probes the detritus of his six-decade career. In life, Cohen bristled with the labels bestowed upon him: the grocer of despair, the poet laureate of pessimism. “You get tired, over the years, of hearing you’re the champion of gloom,” he once told BBC Radio 2. The AGO show exhibits a similar claustrophobia. Cohen was not a cynical keeper of answers, but a seeker of them – many of his journeys were spiritual, and some literal. One of the photos on display captures Cohen’s 1973 pilgrimage to the Western Wall in Jerusalem. Another shows him looking inward, meditating in the San Gabriel Mountains of California.

Perhaps the exhibition’s most intriguing thread is Cohen’s interest in humanity’s drive toward violence. Notebook doodles reveal his fascination with firearms. Correspondence with Cohen’s sister fleshes out his tour of the Sinai desert during the Yom Kippur War –also recounted in Matti Friedman’s book, Who by the fire, released last April. “Cohen strangely embarked on these places because he was fascinated by this aspect of human nature: conflict and the military machine”, explains Julian Cox, deputy director of the AGO and chief curator of the exhibition. “These are things that, at first glance, you wouldn’t necessarily expect Cohen to be interested in. He was a poet and a romantic.”

Military rigor permeated Cohen’s creative pursuits. Despite all his romanticism, he approached his art as a job that had to be done. Money was a factor, until it wasn’t. Cohen wrote almost every day and suffered from the rather modern affliction of compulsive documentation. Polaroids, sketches and self-portraits served as tools for self-examination. “He had an incredible talent for building and controlling how he was perceived,” Cox says. In fact, according to Robert Kory, trustee of the Leonard Cohen Family Trust, Cohen considered the true masterpiece of his life, of all things, his personal archive.

Aviva Layton, a longtime friend of Cohen’s who met him through poet Irving Layton, his former partner, recalls Cohen’s handling of the mythos, in one case for financial reasons. “I remember a time when the University of Texas at Austin got a whole cache of letters between Irving and Leonard. They were all made at our kitchen table on Somerled Avenue in Montreal,” she says. “I would age the letters by soaking them in tea.”

These pages present a selection of Cohen’s treasure. With its release, its legacy is once again presented to the analysis of a new generation of fans, scholars and journalists. Like Cohen, they live in a time of political polarization, rubbing against labels and expertly crafting personal narratives for mass consumption. In 1988, Cohen sang “I Am Your Man”. Decades later, we’re still curious who, exactly, it was.

In his personal archives, Cohen kept a considerable number of notebooks, as one might expect, but also many self-portraits, like this brooding photo booth tape from 1980. “Who knew Leonard was going to be Leonard Cohen? He may have it, because he kept everything! says Aviva Layton, who regrets not having more memories of their six-decade friendship. “There was a little something inside Leonard that knew about his gift.”

Cohen, shown here in 1972, was already an established poet with a reputation for charisma when he switched to live singing in 1967 during an anti-Vietnam War benefit in New York. The move should have been smooth, but Cohen was so paralyzed with stage fright that he left the stage just four lines into his hit song “Suzanne.” American folk singer Judy Collins consoled Cohen backstage and promised she would join him for the rest of the set. “By the time we were done, he was converted,” Collins said in the 2019 documentary Marianne & Leonard: Words of Love. “A total converted to his own magical impression.”

Max’s Kansas City – located, surprisingly, in Manhattan – was a restaurant and nightclub once frequented by the city’s creative elite: Cohen, Andy Warhol, Lou Reed and Nico, among others. Still a mystery is the true identity of “Joan”, the subject of a banter detailed in Cohen’s amorous scribbles on Max’s 1967 wine list. Cohen is said to have later written the songs “Take This Longing” and, tellingly, “Joan of Arc” about Nico. All we know about the menu muse is her diet of veal parmigiana and a singing gig at New York club The Bitter End.

After completing his “The Future” tour in 1993, Cohen, in need of some structure, moved to the California community of Mount Baldy to study Zen Buddhism under Japanese Kyozan Zen master Joshu Sasaki Roshi. Cohen spent six years in a tiny cabin at 1,300 meters above sea level, equipped with little more than a coffee maker, a keyboard and his menorah. He became an ordained monk in the summer of 1996, less than a year after this photo was taken. Cohen saw no conflict between his native Judaism and Buddhism, which he viewed as a discipline. He cooked, he meditated and he happily washed “his little dishes” (his words).

Even the pop poet laureate was not above comparing notes with his contemporaries. After one of Cohen’s Paris concerts in the 1980s, Bob Dylan reportedly asked him how long it took him to write “Hallelujah.” Cohen said two years. In fact, it took him five. A page from this 1983 notebook reveals his process and an unknown verse. “He was a poet,” Layton says. “Of course he was dying.”

Cohen was famous for his stylish attire, which stood out among his beat-jeans-sporting poet peers. But even he had days of insecurity. This portrait from the 80s recounts, as he writes, “one of those days when the hat does not help”. Longtime friend Aviva Layton still remembers Cohen’s oddly formal attire when they first met in Montreal. “I opened the front door,” she said, “and there was a plump Jewish boy in a tweed suit.”

Cohen didn’t just write every day. He also produced endless sketches, like this still life from the late ’70s. Layton remembers the dispatches streaming in randomly through an unlikely channel. “He was calling and saying, ‘Field Commander Cohen here! Are you waiting at your post to receive this fax? says Layton. Much of this correspondence, which arrived in black and white, ended up in the trash, she admits. And the rest? Mostly faded beyond recognition.

This article appears in print in the December 2022 issue of Maclean’s magazine. Buy the number for $8.99 or better yet, subscribe to the monthly print magazine for only $39.99. 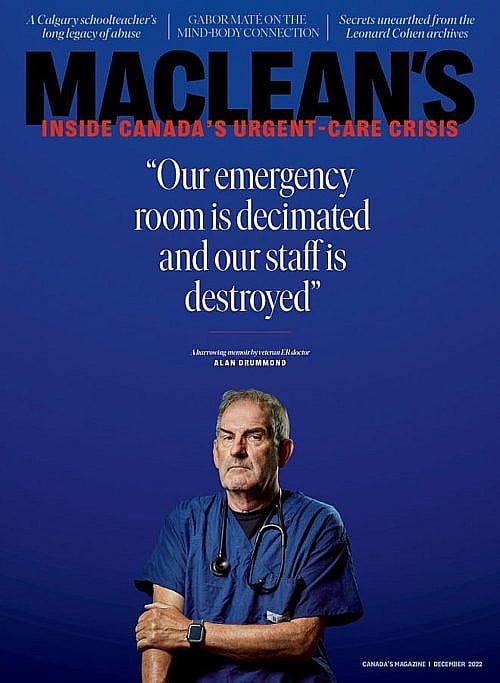