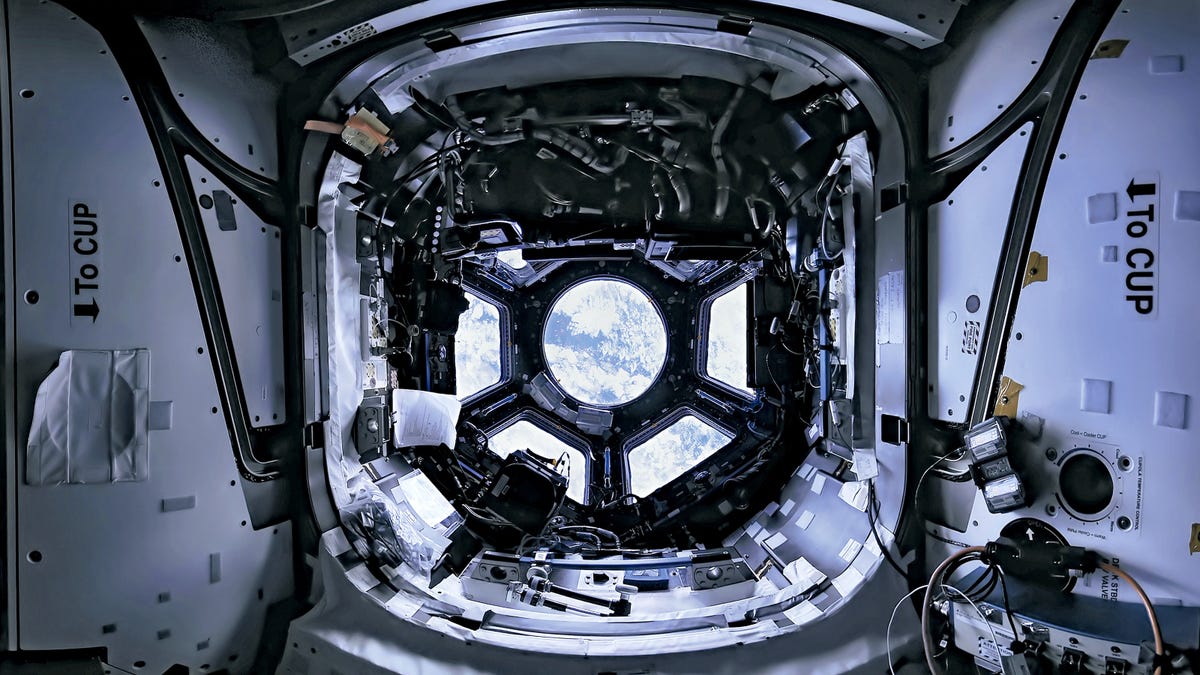 I drift inside the International Space Station, an apparition floating from compartment to compartment. A constant mechanical pounding beats like a heartbeat in my ears, but the station has the silence of the night. I’m surrounded by details to explore, but I’m on a mission. I want to find the famous cupola, the place with the geometric windows with my best chance of seeing our blue marble 250 miles above.

Unfortunately, I literally don’t float. Mine was a virtual stay on the ISS, thanks to a massive in-person virtual reality setup called The Infinite. Donning a helmet and entering an open space larger than a basketball court, you encounter The Infinite’s main attraction, a life-size replica of the ISS for you to explore.

As space tourism puts weightless spaceflight within reach of the hyper-rich, The Infinite offers a virtual excursion into the outer atmosphere for those of us on the cheap. half a million dollars ticket. And at a time when our world is torn apart by pandemic and war, even this brief simulated respite from our planet democratizes a chance at the big picture effect: the sense of humility and unity of gazing at Earth and to understand how the entirety of all known life in our universe is there, right there, on this silent sphere of swirling color suspended in infinite blackness.

“I really, really wish everyone could see Earth from space,” Anne McClain, an ISS astronaut featured in The Infinite, said after her first trip through the facility when it opened in Houston. If people can come to this project, she said, they could feel not just the enormity of our universe and our planet “but also the fragility, how we’re all in this together.”

The Infinite’s ISS is not a meticulous life-size model, however. The walls of this ISS are semi-transparent and intangible. The station is sparse, dark and still, as if frozen in time. Dotted around you, orbs glow a cool blue. After you reach out to touch one, everything fades to black before lighting up again inside a vivid 360-degree capture of the real ISS, as if you’ve suddenly fallen into the photographic memory of the ISS.

Sometimes, in those moments, an ISS astronaut like McClain or Christina Koch joins you in recounting a moment in space life. Other times you just watch the Earth silently spinning below.

“A lot of people think that when we explore space, when we do science, we do it to find out where we’re going,” Koch told a crowd gathered at the facility’s opening in Houston. “Actually, we don’t. We do it to learn more about ourselves and the place we left – and that’s what it does. It does it in a human way. It does it by sharing the smallest things and the biggest things.”

Infinity is as big as it gets. At 12,500 square feet and capable of hosting 150 people in VR simultaneously, The Infinite is the largest in-person VR exhibit in the world. And its foundation is footage shot during the largest cinematic production ever in space, a collaboration between NASA and Felix & Paul Studios producing more than 200 hours of VR recordings on the ISS over nearly three years.

Felix & Paul, run by Félix Lajeunesse and Paul Raphaël, is a Montreal-based VR production company behind one of the world’s first VR movies and a VR documentary putting you in the Oval Office of the House White with Barack Obama.

ISS footage has already produced an Emmy Award-winning VR documentary titled Space Explorers, which can be viewed on Oculus Quest. The Space Explorers series followed the conventions of traditional cinematic storytelling, with linear episodes and character arcs, according to Lajeunesse.

But for The Infinite, “we didn’t want the audience to sit down and watch a movie per se,” he said. “We wanted them to just be there, feel like part of the crew and explore the space station.”

Walking around the replica ISS, people might encounter an astronaut talking to them while doing science, he added, and then encounter another astronaut getting ready to sleep. “That’s what would happen if you were on the real space station flying.”

To create The Infinite as a physical exhibition, Felix & Paul partnered with PHI Studio, a company specializing in immersive installations.

Rather than the kind of virtual ISS installation you might find in a museum or Smithsonian science center, The Infinite is meant to highlight the emotions and poetry of space exploration, said Phoebe Greenberg, founder of PHI.

To achieve this, the installation integrates more than the virtual ISS. It starts with an entry chamber – a triangular white room with shiny stitching that acclimatizes your mindset to space, with an astronaut narrating the feeling of launch. After exploring the ISS, you sit down for a short VR movie showing the first spacewalk captured in VR, then you wind your way through artwork, a path that conceptually riffs on a journey back from space to Earth.

Together, Felix & Paul and Phi created the free roaming experience to accommodate 150 people per hour. As you walk around the virtual ISS, the avatars of other participants materialize as you approach them. If you visit The Infinite with friends, everyone in your party will share a glowing orb of the same color inside their chest. As I scrolled through The Infinite, I could hear Koch, who holds the record for the longest single spaceflight by a woman, thrilled to show her husband around the space station where she lived separately from him for 11 months.

“We tend to think of virtual reality as an experience that we have as individuals because we’re contained within the headset,” Greenberg said. “We wanted to find a way for this adventure to be collective.”

After premiering in Montreal last year, The Infinite wraps up a four-month stint in Houston on Sunday and then reopens in the Seattle area on May 21. Its producers aim to bring the experience to three cities a year through 2026, including San Francisco and Richmond, Virginia later this year and New York and Los Angeles in 2023. They hope to expand The Infinite’s tour to the ‘international. The VR short of the spacewalk is also showing at the TED Conference in Vancouver through Thursday.

I succeeded in my mission to find the dome, indulging myself by spending more of my limited minutes there than anywhere else. As I floated in the cupola, the force of gravity held my body comfortably on the surface of our planet in Houston. Even on this simulated trip to the far reaches of our atmosphere, the pull of Earth still pulled me towards it.

If you visit The Infinite, you may be drawn to observing Earth from above, like me. But McClain suggested another view you should take: looking to the infinity of the universe beyond.

“One of the deepest moments of my own humanity was outside the space station on a spacewalk,” she said during The Infinite’s opening ceremony. in Houston, in front of a crowd of NASA colleagues and guests. “Holding on to a handrail, I looked down and looked at the Earth. I see my feet that have carried me through life. I had this moment, just looking at this point: these are my feet, and this is the whole Earth, everything that we have ever known is on this planet.

“But the thing is, Earth is the closest thing to us. Because then you turn around and look – and it’s just vast. It’s the biggest thing your eyes can perceive. And in that experience, when you’re outside the space station there at the end, I wanted to feel that again. The first thing I did was look away from the space station. simply indicates how much we still have to explore.