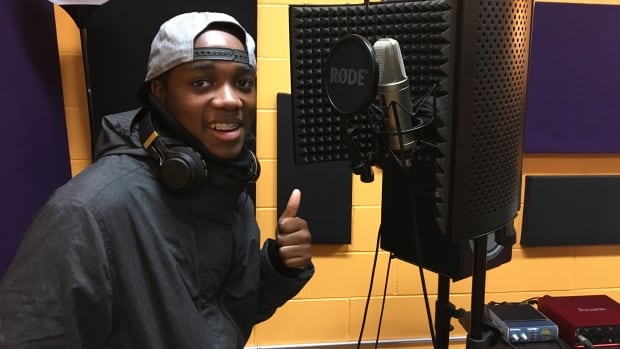 When Sven Creese was younger, kids teased him by calling him “Seven”.

The 16-year-old has now adopted the nickname as his rapper’s name and, with the help of NBS Studio in CÃ´te-des-Neiges, is learning to produce his own music.

He wants to rap on “do the right thing, be a better you, don’t listen to the haters”.

Sven says NBS Studio’s advice has changed his perspective and approach when it comes to certain social situations, like when other teens try to “roast” him.

â€œFor example, they say, ‘Your hair is so far away, it’s coming out of the solar system’ and I would say ‘Oh yeah? Well you’re the cutest person ever, “and they get confused and laugh. It’s funny,” he said.

It is located in the basement of Chalet Kent, a youth reception center formerly known as the Maison des Jeunes, in Kent Park.

Teenagers are involved in all aspects of production: writing, rap, editing, creating rhythms, sound mixing, recording videos for social media, branding, logos and organizing the space where they create their productions.

â€œIf a kid comes along and becomes a better rapper, I feel like we missed it,â€ said Jai Nitai Lotus, NBS Studio director and rap musician with over 20 years of experience.

“Because we can translate that confidence that they have into many different areas of their lives.”

And no one is allowed to include profanity in their music, Lotus said.

It’s great with Gerry Vincent, 17, whose rapper name is Kamino.

â€œIf you curse, it’s just a waste of words,â€ said Gerry, who admits his words weren’t so clear until they found NBS Studios.

Now he’s writing more about his own experiences.

“I’m talking about the fact that you don’t always have the support you need which is why you have to push your limits,” he said.

He gave Mic Drop, CBC’s new teen podcast, a tour of the space where he creates his own beats.

Gerry loves to make music, but rap is not what his parents had in mind. It is featured in the episode â€œMy Wayâ€ of Mic Drop, the new podcast for teens that you can listen to at cbc.ca/micdrop. 0:59

Gerry says his parents don’t relate to his interest in rap.

After learning the guitar, piano and several other instruments, he began to write rap but was reluctant to show his lyrics to anyone.

Once he shared a few lyrics with a friend, this friend convinced him to check out NBS Studio and explore the opportunity to learn for free from a professional hip-hop artist.

“Don’t let anyone stop me”

Now, in addition to his college studies and part-time job, Gerry regularly visits the studio to work on his music and he is determined to stick to it.

â€œIt’s like I have a blank canvas and it’s up to me how I should paint itâ€¦ and I won’t let anyone stop me,â€ he said.

Gerry says he wants his parents to be proud, so he’s considering a career in architecture, but he’s not ruling out his dream of becoming a professional musician.

“This space gave me the opportunity to go a little further in my dream.”

You can hear Gerry in My Way (Episode 3) of the Mic Drop podcast. Download here or subscribe wherever you get your podcasts.

How a Montreal music duo ended up succeeding in Britain