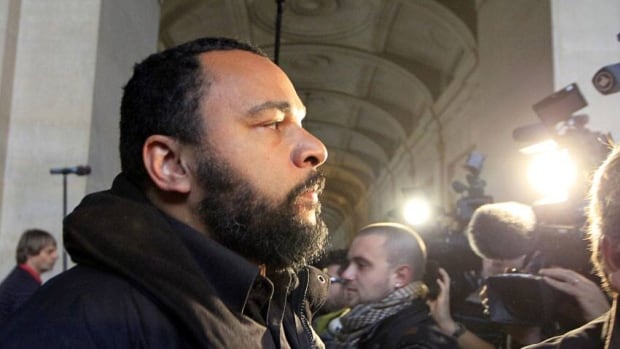 Four shows by controversial French comedian DieudonnÃ© M’bala M’bala booked in Montreal next week have been canceled after Jewish groups expressed concern over his reputation for presenting anti-Semitic material.

Earlier this week, one of his shows in Belgium was interrupted by the national police and ultimately dropped. Last year, the French city of Angers blocked his performance in a local auditorium and he was found guilty of racial defamation in France.

Belgian authorities are investigating whether to lay charges for inciting racial hatred and xenophobia resulting from a performance in March.

In Montreal, DieudonnÃ© was scheduled to give four performances at the Corona Theater starting May 14 in a reservation from the city’s biggest entertainment promoter, Evenko.

Luciano Del Negro of the Center for Israel and Jewish Affairs wrote to Evenko to protest DieudonnÃ©’s appearances in Montreal.

Event organizers will not process it

The Corona Theater issued a statement on Friday saying it had canceled the shows “due to contractual disputes.”

Ticket holders can get refunds, the statement said.

Del Negro says Evenko has promised to be more sensitive in the future about who he reserves.

â€œThe company has a protocol in place to ensure further scrutiny of people requesting use of their sites,â€ Del Negro said.

When DieudonnÃ© was in Montreal in 2004 for Just for Laughs, Jewish groups protested against his show.

DieudonnÃ©’s current program, entitled Give us back Jesus (Give us back Jesus), has been criticized in France for presenting Holocaust denial, insults against the Talmud and praise for Hitler. In France, he has to book his shows in smaller venues because established event planners won’t take care of him.

The comic is also promoting its feature film, released earlier this year. The Antisemite was produced with French and Iranian money.

Good luck to you ! Black Emperor and Neurosis team up for shows in Montreal