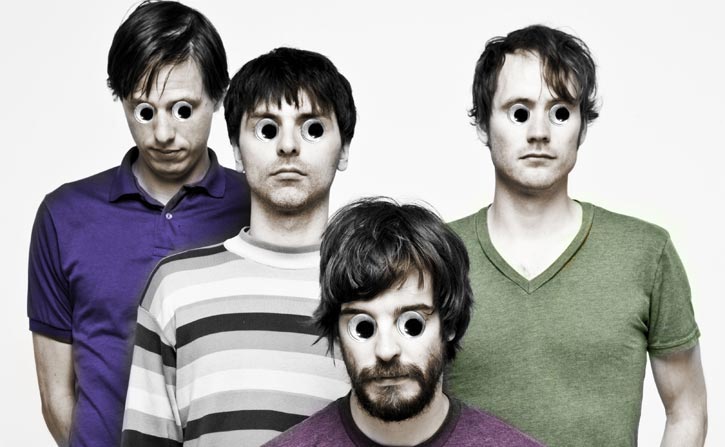 Before we get to the shows coming this week, the real big news for slumming psy-heads is the ultra-rad psych fest Distortion, which will take over Warehouse 77 this weekend, and even slip a killer bill into Casa Saturday evening . If you want to save some money, you can purchase a three-day pass for $40, while single-day tickets are only $20.

Last week, I had to announce the cancellation of a Montreal makeup show by the almighty Bikini Kill, and unfortunately the cancellations and postponements follow one another. Japanese Breakfast had to cancel their date in Montreal on Wednesday this week and now tonight’s Young Guv show with Seed Toss and Pantie Wilson at the Esco has also been cancelled. It’s a bummer, but never fear, there are still some killer shows in Montreal as things get sweltering at the local watering holes.

Thursday:Tonight is a total no-brainer as ex-Coliseum vocalist Ryan Patterson’s synth punk awesomeness is blasting new wavers with his new project Fotocrime at Bar le Ritz PDB, with strong backing from Pop. 1280 – nice catch from Jim Thompson! If you really want to be a Fotocrime trainspotting fan, check out their killer cover of Government Issue’s “Jaded Eyes” and really freak out. (Montreal punks versus cops moment #60089: Were you at the Coliseum concert in Griffintown when the pigs shut it down?) 179 Jean-Talon West, 7 p.m., $20

If you miss the days of backpacks, kids leaning over the stage and taking pictures of guitar pedalboards and time signatures that can turn on a dime willy-nilly, you’ll want to do the nerd scene at Turbo Haüs to catch abacus rockers and touring warriors Life in a Vacuum with support from Mexico City’s Joliette with Fomo and the Last Mile. 2040 St-Denis, 8 p.m., $10/$15

Friday: I’m going to start things off for the weekend with an absolute banger that stays easy on the pocket book. If you like your heaviness and were looking for a good excuse to darken the gate of Foufs, you can check out the Prowl disc release with the guttural death grunts of Scorching Tomb, Cohesion, Scaramanaga and Shut Away. Five strips for $10! What is 2019? 87 Ste-Catherine East, 7 p.m., $10

If the aforementioned gigger’s death crunch is a bit too much for you, you can drown in the sea of ​​reverberant twang for a great night of surf music under the banner of Sizzlin’ Summer Surfaganza. There is another cancellation due to illness: whammy bar-benders the Men in Gray Suits will not be able to make their place as a marquee. In their place are the surf and grass sounds of the Waveyard with East Coaster duo, the Green Reflectors. Everything happens at the Esco, natch. 4461 St-Denis, 9 p.m., $10

Friday and Saturday nights at Sala is the Noise Not Borders Fest, featuring international punk oozing with piss and vinegar. There are waaaay too many bands to mention here, but the two headliners of each respective night are from Columbia, with Lupus on Friday nights and Caverna on Saturday nights. It’s guaranteed to be real fucking raw punk here folks. Also, you might want to smash your PBR cans in the park earlier than usual, as it’s a very early start to try and keep up with the stacked bill. 4848 St-Laurent, 5 p.m., $36 a night / $64 for a two-night pass

Saturday: If the Noise Not Borders festival is a little too rough for you and you just want a lot less punk in your, er, punk, you’ll want to head to former punk hotspot Foufs to catch the pop punkin’ The smells of fart Teenage Bottlerocket with Jen Razavi of the Bombpops. To be fair, Teenage Bottlerocket makes Sum 41’s mall punk sound like Darkthrone, but whatever. 87 Ste-Catherine E., 7 p.m., $24

At Distortion, Golden Dawn Arkestra will bring the Crowley vibe with openers Gus Englehorn, Hot Garbage, Zoon and Karma Glider starting at 3 p.m. (77 Bernard E.). If you’re still tripping bullets at 10 p.m., head to Casa for the official afterparty with the ever-crucial Priors and Psychic Void. This concert is about $15 at the door. (4873 St. Laurent Street)

Now you should definitely be thrilled to witness the ultra death of Wake, who will be headlining Turbo Haüs, but you really, really need to get there in time to catch the first band of the night, the Great Sabatini . The “other Sabs” jumped on the bill at the last minute and this may be your only chance to see them for a long time. Believe me, they fucking kill, so come early. The middle slots will be occupied by the executioner’s mask and the hemorrhage. 2040 St-Denis, 8 p.m., $10/$15

Sunday: Only serious psychiatrists will be primed and ready at 3 p.m. for the last day of Distortion, with Orchester Tout Puissant Marcel Duchamp, la Sécurité, Motherhood, N Nao and Larynx opening the room. Might as well call in sick to work next week right now. 77 Bernard E., $20/$40 for a three-day pass