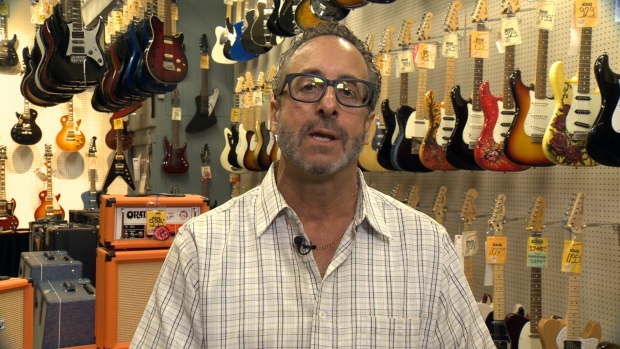 MONTREAL – The Montreal music scene has lost a favorite son.

Sheldon Sazant was the general manager of Steve’s music store, but he was also recognized as the driving force behind local artists.

He died Thursday after a short battle with cancer.

Throughout the legendary story of Steve’s music store, Sazant stood by the door, greeting customers for four decades.

For the musicians of the city, he was the heart and soul of the store.

“I don’t think there are any local musicians or the local music scene who don’t know who he is and haven’t taken care of him,” said store manager Jason Hart.

Unlike his clients, Sazant was not an accomplished musician – but that didn’t matter, said Jim Beis, mayor of Pierrefonds-Roxboro and himself a guitar fanatic.

Beis said that Sazant’s magic happened the second you walked into the store.

“He made you, from that moment on, feel like a rock star and special and took the time, whatever your knowledge of the equipment, to guide you and choose the right instrument for you”, did he declare.

“He would always say, ‘We’re here to sell dreams, we don’t just sell instruments, we sell experience,” he said.

One of those dreamers was Albert Chambers, a Juno-nominated musician, producer and songwriter, who began working with Sazant.

“I think what Sheldon understood the most was the relationship between all the musicians in town and their needs,” he said, adding that for that Sazant didn’t have to be him. – even a virtuoso.

“I don’t think you need to know what a Minor A was to be able to understand that they were in desperate need of something and were going on tour,” he said.

The service for Sazant will be held at Paperman Funeral Home on Sunday January 26.

The Montreal music community is preparing a tribute concert next week.