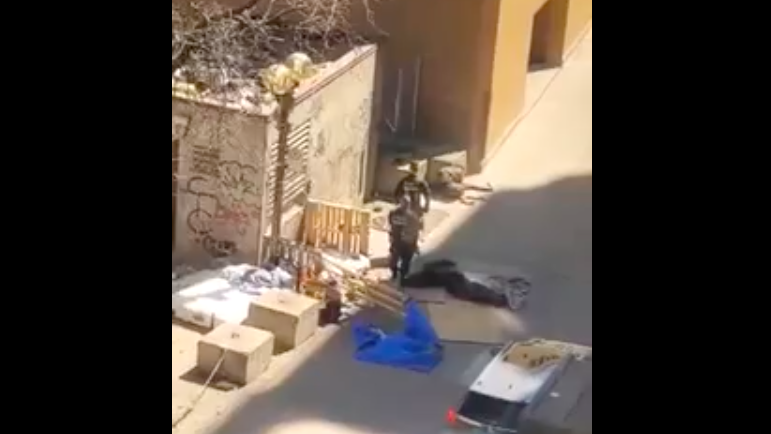 A Montreal police officer will respond to the force’s “integrity” department after he was filmed violently pushing an unarmed homeless man face down into a concrete block.

The video, which was taken in Chinatown on Thursday, shows a relatively young man standing up after hitting the block headfirst, only to have the officer shove him again.

“I think it was a matter of centimeters,” the man who shot the video told CTV News.

“He could have split his skull, broken his neck.”

After the man stood up, clearly disoriented, “the cop didn’t even go to see if he was okay…he just picked him up and pushed him away,” said the man, who didn’t want his name. published for fear of reprisals by the police.

The 17-second video, which he posted on TikTok, already had around 50,000 views a day later and had caught the attention of not only Montreal police, but also those who work with people living in the streets of Montreal.

“This person seemed harmless, didn’t seem aggressive at all, from what I saw,” said James Hughes, CEO of the Old Brewery Mission, a nearby men’s shelter.

“And so what I witnessed in the video was totally unjustifiable,” he said. “We are going to talk to the police about it ourselves.”

Montreal police (SPVM) said in a statement on Friday that they were “well aware of the video that is currently circulating on social media” and that they were investigating the incident.

They followed shortly after to say that the police had officially opened an internal investigation, which will be handled by the SPVM’s “Integrity and Professional Standards Department”.

Two officers were present in the video, but it is unclear if both are under investigation.

The man who filmed it, however, says both officers were involved and the whole episode was even more disturbing than the 17-second clip.

He only turned on his camera after seeing another officer – the second who appears in the video – inflict a different type of head injury on the man, he said.

At the time he shot the video, the man was visiting a friend in a building across the street from a “half-abandoned” neighborhood between Clark and Saint-Urbain streets, just north of René-Lévesque Boulevard, where people living on the streets congregate, he said. He looked out the second story window to see the scene unfold.

“There was…a hut that the guy had made. It was two pallets with another one on top and a tarp. It was a little house type thing,” he said, who tend to be rebuilt in the same place consistently.

By the time the police approached, the homeless man was sitting in it with a blanket hanging down like a door. He pulled the blanket aside to talk to the officers, then one of the officers suddenly knocked the bench top off balance on top.

“He pulled it out and the top board fell on the head of the guy who was in the pen,” the man said.

“The guy touches his head, looks at his hand to see if there’s blood, so it must have hit him pretty hard,” he said. “That’s when I started filming.”

The man, looking stunned, appears on the video to argue with the officer or complain about what happened.

It is then that “the other [officer] came…looked like he didn’t know the guy just got hit with a plank,” the passerby said.

“That’s when he decided to hustle him.”

Later, after the man staggered down the street, “the cop pulled out his billy bat and started chasing him,” the man – also not captured on video – said.

THE ‘EXACT OPPOSITE’ OF HOMELESSNESS POLICE TRAINING

The Old Brewery Mission regularly holds training for rookie officers and teaches them to do “the exact opposite” of this stuff, Hughes said – and it does so with the support of SPVM leadership, he said. declared.

“Most of the time they’re left alone…they’re on their own,” Hughes said.

Young officers learn to approach as a possible source of support, asking if the person needs help and if they are in “distress” of any kind, to get an ambulance or put them in touch with health care, Hughes said.

“There are up to 1,000 people sleeping on the streets of Montreal every night. And the police department has improved so much over the years…that seeing this incident of violence against an individual sleeping in the street, on the street, it’s really, really disappointing and very sad,” he said.

“Actually, what seems like an aggressive dismantling of where someone is staying and then aggressively pushing them out of the way, as we’ve seen, and the guy almost had his head hit that concrete block, does that leave me scratching my head, like what was going on?”

The man who shot the video said he felt the people currently using this corner of Saint-Urbain were being encouraged to “get out” of their old haunt, a little further north in the Village, and more recently have started gathering in Chinatown.

But aside from the horrors, he said he had rarely seen more serious problems there.

“Most addicts you talk to are nice people. They’re just struggling with something,” he said. “You see them doing crazy things, but as long as they don’t attack ordinary people, I don’t understand why they bother people.”