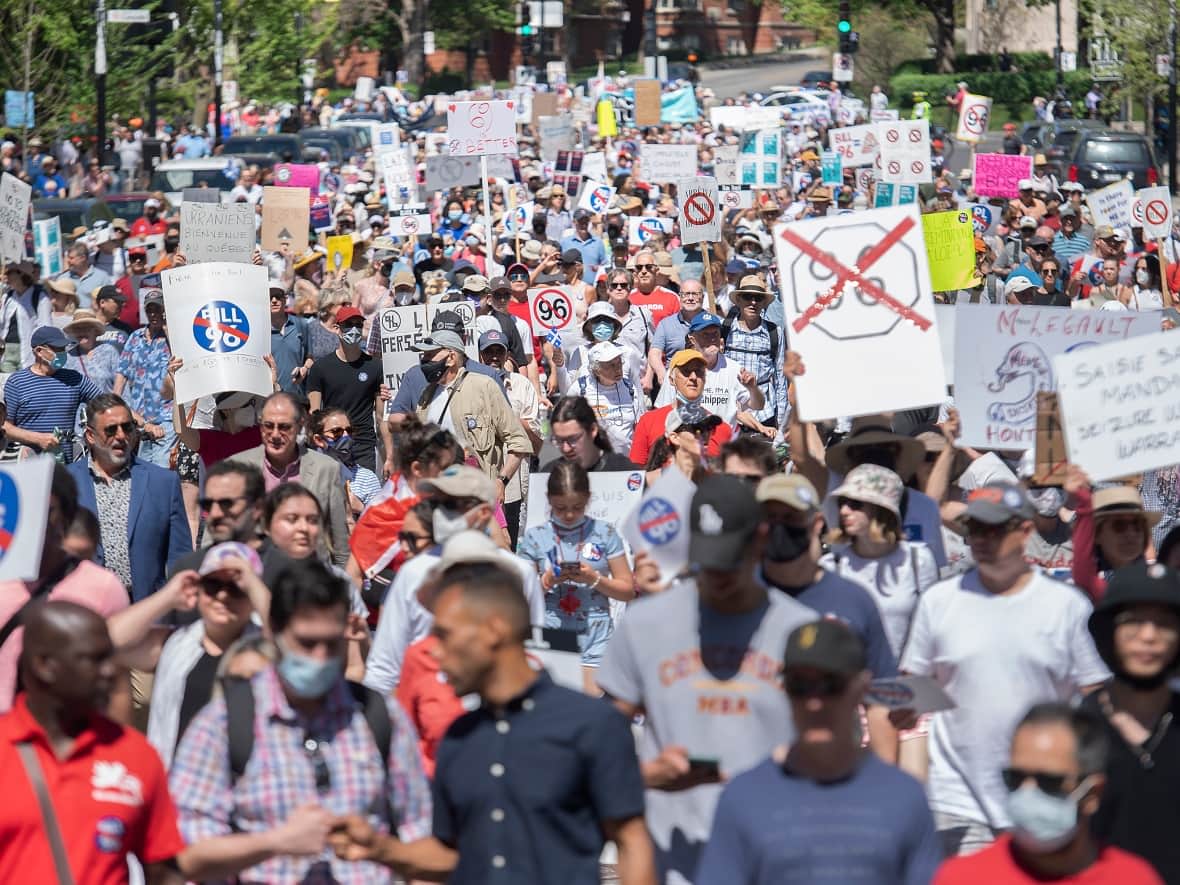 The streets of downtown Montreal were flooded with protesters on Saturday as many rallied against Bill 96, the Quebec government’s proposed law to reform its Charter of the French Language.

Organized by groups that represent the province’s English-speaking community, the protest aimed to send a strong message to the majority government that the legislation as it stands is unacceptable.

“We say to the Prime Minister [François] Legault and his CAQ government [that] we are Quebecers,” said Marlene Jennings, president of the Quebec Community Groups Network.

“We cherish and support French, we want to see it protected and promoted, but not on our backs, not on our fundamental rights.”

Tabled a year ago, Bill 96 is in the final stages of adoption and is expected to be voted on in the National Assembly later this month. It would make several changes to the 1977 Charter of the French Language, also known as Bill 101, strengthening the status of French in “all spheres of society”.

Despite the sweltering heat, protesters took off from Dawson College at 10:30 a.m. and marched just under two kilometers to the Montreal offices of Quebec Premier Francois Legault at the corner of Sherbrooke and McGill College Avenue.

Signs reading “Is there room for me in Quebec?” and “Protect French, but not at the expense of English rights” were seen among the crowd.

While many protesters agreed that French should be protected in the province, they said the law would restrict access to education, health care and justice for those whose first language is not French.

Proposed changes to the charter include requiring newcomers to Quebec to receive government services exclusively in French after six months in the province – what many have called an unrealistic schedule to learn a new language.

An amendment to the bill also passed recently would require students in English-language CEGEPs to take three additional courses in French — with no exemption for Indigenous students.

Kenneth Deer of the Kanienʼkehá꞉ka (Mohawk) Nation of Kahnawake called the decision colonial and insensitive.

“We are struggling to keep our own language alive, so Bill 96 places an additional burden on our people,” he said.

“Our priority is for our people to learn Mohawk.”

To ensure that French is “the official and common language of Quebec”, the government would also impose new obligations related to the use of French in companies with 25 to 49 employees, would limit the use of English in courts and public services, granting warrantless search and seizure powers to Quebec’s language regulator, and limiting enrollment in English-language CEGEPs to prevent more students in French-language schools from moving to English section.

Quebec Liberal Party leader Dominique Anglade took part in the protest on Saturday, saying there are better ways to strengthen the French language than to create a division among Quebecers.

“But it has to be done in an inclusive way, for all Quebecers, and that’s not what Bill 96 does right now.”

The minister responsible for the French language in Quebec, Simon Jolin-Barrette, vigorously defended Bill 96 in the face of criticism, as did Legault, who called it reasonable, balanced and necessary “to ensure adequate protection of the French language “. “

The government has preemptively invoked the notwithstanding clause, which will limit the possibility of a legal challenge to the law.

Despite Legault’s assurances that the rights of Anglophones will be protected, Kiana Lalavie, a student at Dawson College, worries about how extra French classes at Anglophone CEGEPs could affect international students and newcomers to Quebec.

“They don’t have English rights,” she said. “Their R-score would go down, their opportunities in life would be limited, and they wouldn’t be able to access programs of their choice.”