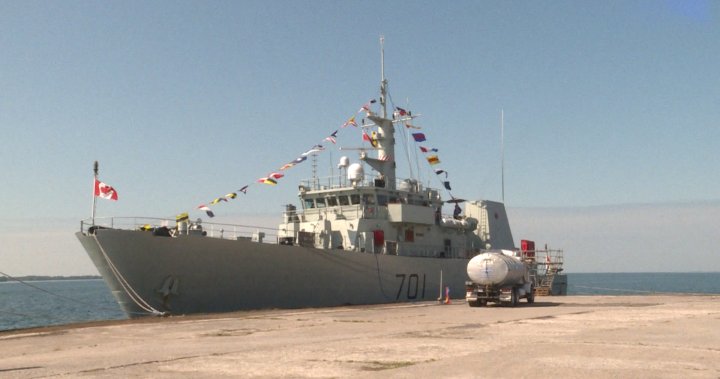 A Royal Canadian Navy ship docked on the Kingston waterfront for a tour of Lake Ontario.

HMCS Glace Bay welcomed locals aboard for tours on Wednesday.

The stopover is part of the houseboat’s Central Canada tour, having stopped in Hamilton, Toronto and Oshawa.

The ship is an active warship that was commissioned in 1996; he is involved in missions around the world, aiding allies and conducting humanitarian missions.

“We are conducting counter-narcotics operations in the Caribbean Sea. I mentioned West Africa, doing partner capacity building there and HMCS Kingston and Summmerside just joined NATO as part of the mine countermeasures group,” Ruggles added.

HMCS Glace Bay has a crew of 45, which may vary with each deployment.

One of those crew members is Alexis Pemberton who hails from Kingston and is making the most of the stop in his hometown.

“My father-in-law and my brother-in-law have already left on tour. My grandparents are arriving later this afternoon, and so is my sister,” she said.

The ship has fairly cramped quarters, with some of the lower rank sailors being accommodated three or four to a room.

All the time spent at sea allows crew members to bond with each other, forming fast and lasting friendships.

“You really get close to the people under your watch. They are like family to you. You have a lot of inside jokes. You’re up in the middle of the night, sometimes you say and do funny things and you crack jokes with each other. You make friends that you really wouldn’t make anywhere else,” Pemberton added.

HMCS Glace Bay will stop in Montreal and Quebec City on the final leg of her tour, before setting sail for West Africa in January.