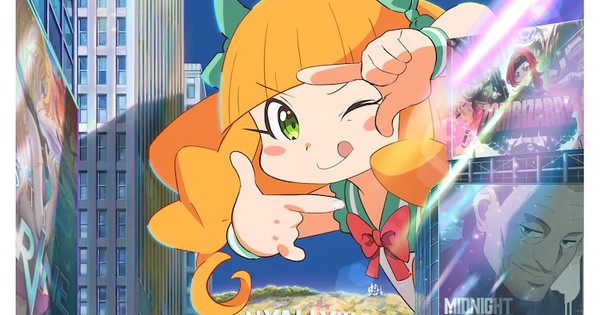 GKIDS Screens Pompo: The Cinephile Anime Film in US Theaters in April – News

Film premieres with previews on April 27 and 28; opens in select theaters April 29

GKIDS announced on Wednesday that it will begin screening the animated film by Shogo Sugitaniit’s Pompo: the cinephile (Eiga Daisuki Pompo-san) manga in the United States on April 29 at select theaters with a special preview screening for fans on April 27-28. The film will be screened in Japanese with English subtitles and an English double. The company released a trailer:

Previews will include a director’s introduction Takayuki Hirao.

If you’re reading this, chances are you love movies. You’ll feel right at home with Pompo, the talented and courageous producer whose love of cinema is unwavering and unapologetic. One day, Pompo turns his uncanny eye for talent to his concerned but cinephile assistant Gene, selecting him to make his directorial debut with his latest screenplay. But Gene has his work cut out for him with a young starlet looking for her first big break and a legendary, aging, Brando-like superstar on camera. It’s not an action movie, but Pompo’s blistering pace combined with the high stakes of creative flourishing in as much excitement as standard superhero fare. Add to that a slew of insider movie references and countless nods and nods to the filmmaking process, this hilarious and heartwarming comedy-drama has what it takes to make even your dreams come true. craziest celluloid.

Takayuki Hirao (The garden of sinners movie 5, god eater) directed the film at TYPE. Shingo Adachi (Sword Art Online, Wagnaria!!) designed the characters. Ryoichiro Matsuo (In this corner of the world) served as the producer. vocaloid producer Iori Kanzaki composed three vocal songs for the film. virtual singer Kaf performed a insert a song “Tatoeba” (for example) and DUSTCELL singer EMA performed the other insert a song “Hangyakusha no Bokura” (We the Rebels). Besides, Seiko Niizuma performed the opening number of the film “Dance on Fire”. Rookie singer CIEL performed the movie’s theme song “Mado wo Akete” (Open a Window).

The animated film premiered in North America at the 25th International Fantasy Film Festival in August.

Sugitani, who also goes by the pen name Ningen Plamo (“Human Plastic Model”), began assignment the manga on the pixi website in April 2017. Positive word-of-mouth on social media sites and elsewhere has since led to over 500,000 views of the manga. The manga was nominated for the 11th Manga Taisho Awards in 2018. Sugitani spear a spin-off manga titled Fran: The Cinephile (Eiga Daisuki Fran-chan NYALLYWOOD STUDIOS SERIES) on the cartoon pixiv website in July 2018.

This Southern NJ Town Named One of America’s Most Beautiful