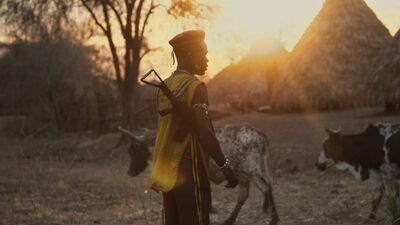 Cannes 2022: launch of the Fest with Zombies, Art Movies and Maverick | Parties and awards

The next day I caught Alma Viva Cristèle Alves Meira tells the story of a young girl named Salomé (playing the director’s wide-eyed girl, Lua Michel). The film blends the supernatural with near-documentary precision, highlighting the Portuguese village setting in an acute way. It’s a quiet, introspective film with an understated setting despite the clear family troubles that are on display. The outcome seems more unsettled than unsettling, either lacking a strong push for gender recuperation or even anything beyond expectation as the sibling breakups escalate.

After such silence, it was quite the change to attend an interview session with the festival’s biggest draw, Tom Cruise. The Debussy Theater was packed for the conversation with Didier Lalouche, and it was clear that Cruise was on a mission to make his point. Although very entertaining, charismatic, even magnetic at times, if one had to sum up the hour-long conversation, it would be a form of “learn all aspects of your craft”, “support the cinemas” and “I do for the spectators”.

Again, that doesn’t take away from the effect this Hollywood star continues to have on audiences both in person and on the big screen. This feeling that he was a dying breed was at least part of the undercurrent of what was discussed. There were great stories of humility, and others that showed how much he had contributed even when working under masters like Kubrick. Sitting just feet away from him, it remains unsettling just how charismatic he can be in person, an aura the motion picture camera has managed to harness for decades.

The next morning, after what felt like a lifetime of waiting, I could see Top Gun: Maverick. It was screened, deliciously, in the new Agnes Varda theatre. I’d like to think that Varda herself was there in spirit, smiling wryly at the handsome men and women on screen, the erotic machinery, and the loud soundtrack. Right from the opening note and the “Simpson/Bruckheimer” logo, you know the nostalgia is going to be rocketing all the way to full afterburner, but I was so thrilled that they stretched the storyline to almost mythical levels, borrowing to everything from “The Dam Busters” to (more overtly) “Star Wars” to provide its structure.