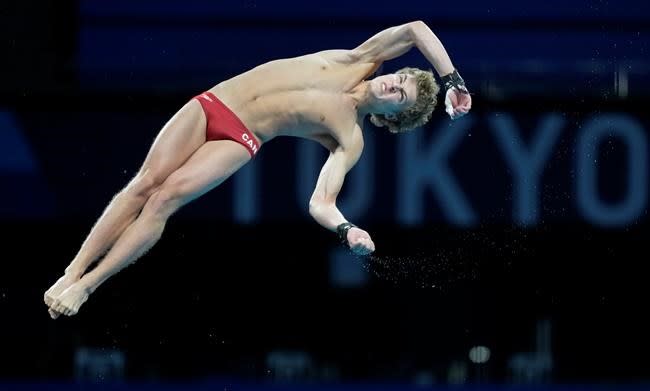 Canadians Zsombor-Murray and Wiens embark on a synchronized partnership

CALGARY — Two Olympic divers from Canada are set to release their new partnership for an international tour.

Nathan Zsombor-Murray of Montreal and Rylan Wiens of Pike Lake, Sask., who made their Olympic debuts last summer on the 10-metre tower, will compete in synchronized diving together for the first time when the Grand Prix of FINA in Calgary will begin on Thursday.

“It’s super cool,” Zsombor-Murray said Wednesday after a workout at the MNP Community and Sports Center. “I sync with a guy who is basically my age and we have a very similar technique.

“We’ve always been friendly competitors. There’s never been any drama. If there’s no drama on the pitch, there won’t be any drama on the tower.”

The pair had few training sessions together, but pulling off a four-and-a-half forward somersault on one of their first outings looked promising.

“It’s our first synchronized 10-metre race in real time,” said Wiens. “We go well together. We both look alike in diving.

“Being there with Nathan is great fun. We can banter back and forth and banter.”

The Grand Prix is ​​the first international event for most Canadian divers since the Tokyo Olympics last summer.

The retirements of Olympic medalists Jennifer Abel and Meaghan Benfeito have opened the door for the next generation of Canadian talent to step in and headline the national team.

Zsombor-Murray, 19, and Wiens, 20, are currently ranked fourth and seventh respectively in the world in the 10-meter individual by FINA.

Zsombor-Murray placed 13th and Wiens 19th in their Olympic debut in Tokyo.

Given their age and familiarity, the two expected to be paired up at some point in their careers, but it almost happened way ahead of schedule on an Olympic stage.

Zsombor-Murray’s synchro partner, Vincent Riendeau, injured his back while training at the Tokyo Aquatics Center.

Thus, Zsombor-Murray and Wiens were brought together for the first time in a training session in case Riendeau could not compete.

Riendeau, who was able to dive, and Zsombor-Murray placed fifth on the synchro tower.

However, bases were laid for Zsombor-Murray and Wiens, before Riendeau retired.

“As soon as we did this session, we watched the video and were like, ‘Yeah, okay, well next year, once we’re sort of paired up, that’s going to be a thing. We expect that,” Wiens said.

Montreal was supposed to host a Diving World Series event in May, but FINA suspended the series and postponed the event.

So the four-day Grand Prix that ends on Sunday is a last chance for nearly 70 divers from eight countries to hone their skills ahead of the World Aquatic Championships from June 18 to July 3 in Budapest, Hungary.

Zsombor-Murray and Wiens are among just six Canadians heading to Budapest alongside Caeli McKay and Margo Elam of Calgary, Mia Vallée of Kirkland, Que., and Bryden Hattie of Victoria.

McKay, who finished fourth in the women’s 10-meter synchro with Benfeito in Tokyo, will not compete in Calgary to save an ankle she injured before the Olympics for the world championship.

The timing of the world championship wasn’t ideal, Geller said, so Canada will send a larger team to the Commonwealth Games in Birmingham, England in July.

“The idea is to come back with more medals than we’ve ever had. We go get medals and come home with a heavier bag.”

Zsombor-Murray and Wiens want to continue their progress in the individual rankings this summer, as well as measuring their position as a synchronized duo.

“It’s kind of going to see what’s out there for synchro teams around the world, because they’re all going to the Olympics in 2024,” Wiens said. “We have to see where we rank.”

This report from The Canadian Press was first published on June 8, 2022.

THE CRESCENT STREET GRAND PRIX FESTIVAL IS BACK AND BIGGER THAN EVER!