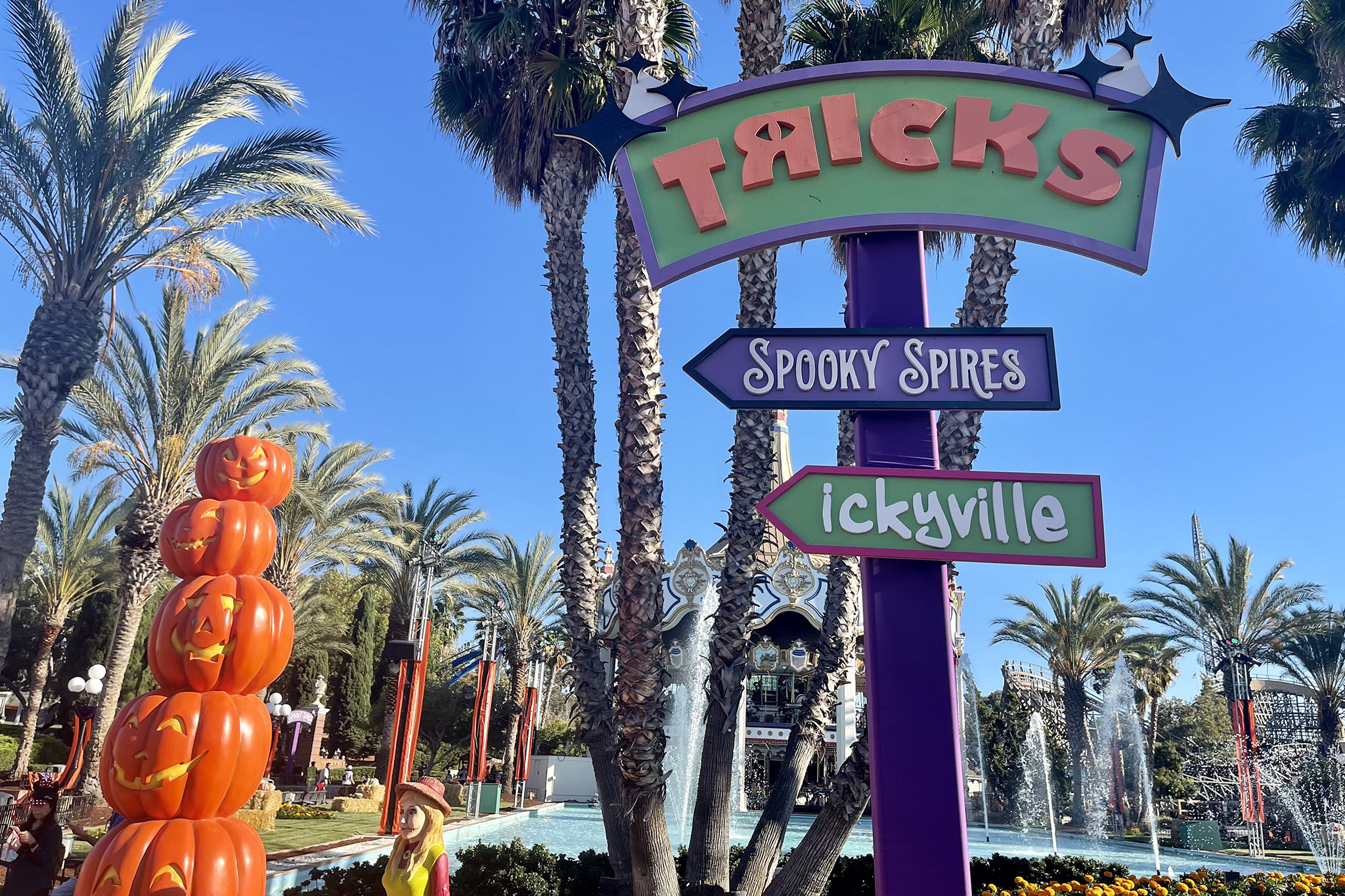 For many, the Halloween season begins when the leaves begin to turn and the air brings that crisp, distinct feeling. Theme parks – at the other end – take an entirely different approach.

As a theme park reporter, spooky season kicks off for me in August, because part of the gig involves going to many of the nation’s biggest Halloween events at theme parks. (Yes, I was that person eating Magic Kingdom’s candy corn soft drink in the sweltering heat.) When the opportunity presented itself, I jumped at the chance to visit California’s Great America, the iconic Bay Area staple in Santa Clara. The park, which is expected to close at some point in the next 11 years, has totally revamped its Halloween celebration this year.

I went to the family park not to check out its jaw-dropping single-rail steel roller coaster — although it was awesome — but to check out its brand new Halloween event. The annual Halloween Haunt, a spooky, adult-friendly event, has been retired to make way for Tricks and Treats for families.

The move isn’t entirely surprising, given that these haunted house-style events can alienate regular visitors. Halloween events like Knott’s Scary Farm at Knott’s Berry Farm (another Cedar Fair-owned park) and Universal Hollywood’s Halloween Horror Nights can be intense and too scary for people who don’t like horror. Even Oogie Boogie Bash, Disneyland’s family-friendly Halloween party, closes the park to regular guests at 6 p.m.

Great America’s Halloween pivot is part of a larger new direction Cedar Fair has taken the park, leaning into the “fun and festive” atmosphere of holiday events rather than the spookier Halloween events of the years past, as Cedar Fair creative producer Clayton Lawrence told SFGATE.

“With the launch of our WinterFest holiday event, we invested heavily in the product and received acclaim from our guests and families as it allowed them to enjoy a new tradition together,” he added.

I visited Tricks and Treats on opening night – and was immediately impressed. The event divides the park into four distinct lands: Ickyville, Spooky Spiers, Sweet Tooth Acres, and Everfall. They collectively tell the story of Halloween through an immersive “streetmosphere”, decor, entertainment and food.

I first fell into the 1920s vibes of the Spooky Spires, where I was mesmerized by a ghostly vocal trio, the Spectral Sisters. With captivating melodies and fun tunes, they performed New Orleans jazz twists on popular hits. The sisters were so entertaining that I ended up coming back for another show later that night.

Everfall depicted the reverie of fall, with overflowing pumpkin patches and craft beers. The Willy Wonka-esque Sweet Tooth Acres was whimsical and colorful, with a singing quartet, traveling marching band, and candy-inspired characters interacting with guests.

Sweet Tooth Acres was also home to the trick-or-treat trail, a street of eight themed miniature houses where guests knocked on the front door for candy, just like they would in real life.


Spooky zones are the cornerstone of most Halloween events at theme parks, but they usually cause some screaming. At Tricks and Treats, they used the concept of self-contained areas but gave them a child-friendly twist. Here, goofy characters, like the mud-filled Ickyville cleanup crew, didn’t jump on you, but instead leaned into improv comedy to interact with guests.

The talent level was high throughout the event, from a slime-themed game show, “The Gross Out Gauntlet,” to an energetic performance by the all-zombie band The Snots. It was like being inside a large scale live production. Guests danced the night away in a silent disco with a macabre DJ and dance crew, and a costume council met every night for a costume contest inspired by “RuPaul’s Drag Race.”

Lawrence said it took a full year to create this new event, using everyone from improv and show directors, choreographers and stage, costume, makeup and technical designers.

“Each character, show and attraction is a puzzle piece that is written to fit together, creating a truly immersive experience,” he said. “The park has also been used to act as a backdrop for the story, so the scenic design and decor are carefully tied together to make you feel like you’re in the four distinct lands of Tricks and Treats.”

A highlight every time I visit theme park events is the specialty food and drink. At Tricks and Treats, it was obvious that the food was not an afterthought. With country-themed treats, the food fueled the story again.

The first stop on my wickedly delicious journey brought me to the playfully named Blood Bank Bar, where I drank a blood bag cocktail. My evening continued with Bride of Frank’s ice cream which left my lips and mouth black for a good 30 minutes – and I secretly loved it. The most surprising ? A well-executed birria dish with homemade tortillas that taps into the park’s Californian roots.

Did I, an amusement park-loving adult without children, have a blast at an event suitable for family customers? Yes – and it was a welcome relief to shout.

The whole event was of a surprisingly high caliber: it had that kind of special charm that you don’t find in large theme parks. Greater America itself is beautiful and clean – a statement not often associated with regional theme parks.

Cedar Fair took a risk in leaving its popular event behind, but it paid off. Park flexed his creative muscles and raced with him to the oversized candy corn farm. It may not have the shine and polish of Universal or Disney, but it’s an impressive feat that I’ve yet to experience at a regional theme park.