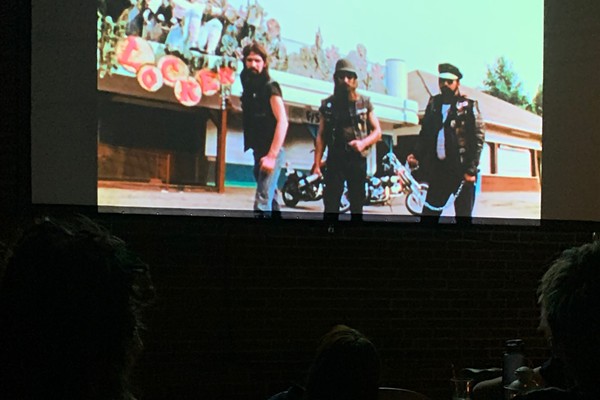 Fans are enjoying a rare movie at the Arkadin cinema.

Arkadin Cinema announced a new season of outdoor movie viewing in its backlot.

As Saint-Louis’ first microcinema (5228 Gravois Avenue), Arkadin’s plan began as a nice little place where local moviegoers could enjoy cult and rare films. But when the pandemic hit, the company pulled off one of the best pivots in town and started showing movies outdoors so fans could safely enjoy movies outside in its backlot. .

This is the third summer that Arkadin has offered outdoor films. Co-owners Sarah Baraba and Keith Watson hope to start showing movies indoors later this year, but until then audiences seem happy to continue enjoying the little movie nights the couple have thrown for them at the outside.

It seems that every movie night has a special element: some movies are almost impossible to find, some screenings are held to benefit a charity, and sometimes there are other treats, like dogs allowed to come with their people to an upcoming screening of Best of Show.

One of Arkadin regulars’ favorite nights is the monthly “Drinkolas Cage” night – it involves members of the public playing a drinking game at this screening of a Nicolas Cage film.

The third season of Arkadin just started this week. You can see what’s been announced on the schedule so far this year below. To visit ArkadinCinema.com to find out more or reserve your place at these small events.

April 8 -ROBOCOP (1987)
April 13 – A collection of MAGICAL SPRINGTIME SHORTS AND OTHER ODDITIES, presented by Silents, Please STL (a St. Louis film series dedicated to promoting silent film)
April 15 – DAISIES (1966), the most anarchic entry in Czech new wave cinema
April 20 – Alfred Hitchcock’s Master of Suspense NORTH BY NORTHWEST (1959)
April 22 – Filthy, blood-soaked DIY action movie DEADBEAT AT DAWN (1988), sponsored by Earthbound Beer
April 27 – DRINKOLAS CAGE, another episode of Arkadin’s monthly Nic Cage movie and drinking game which takes place on the last Wednesday of every month
April 29 – A screening of BEST IN SHOW (2000) adapted for dogs invites guests to bring their pooch to the cinema
April 30 – A performance for Tenth Life Cat Rescue with a screening of HOUSE (1977)

Crazy in love | The Tyee