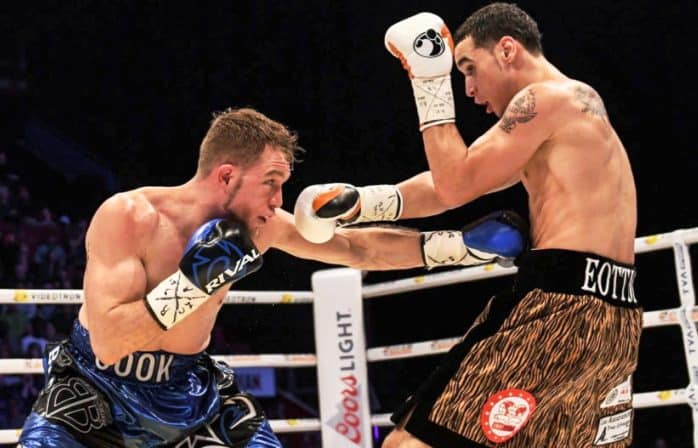 Ajax’s Brandon Cook, shown here beating Steven Butler in Montreal in 2017, beat Czechia’s Stepan Horvath on Saturday night at the CAA Center in Bramption via a 2nd round TKO

A pair of Ajax fighters who shared main event honors on Saturday night’s United Promotions card at the CAA Center in Brampton were both victorious but took different paths to glory.

Sukhdeep Singh, who might as well reside in Brampton as it seemed half of B-Town’s Sikh community turned out to be supportive, kept his perfect record, now 13-0, and won the IBA International Middleweight title. on Saturday with a unanimous decision victory over an experienced and very tough Albanian fighter named Xhuljo Vrenozi.

Singh, who is also the Canadian middleweight champion, won nine of ten rounds on two scorecards and all ten on the other, but couldn’t put Vrenozi away, much to the disappointment of the pro Singh crowd, who sported ‘Team Chakria’ (his hometown in Punjab) t-shirts and chanted “Sukhdeep” after every shot.

‘Bad Boy’ Brandon Cook, meanwhile, made short work of Chechia fighter Stepan Horvath, knocking him down twice in the second round – the second with a vicious right – before referee Floyd Porter put an end to it. to the procedure.

There were six fights in all on Saturday and six fights the night before in a championship boxing doubleheader not seen in many years. Is boxing back? Difficult to assess the crowd on Saturday which took a long time to arrive but ended up filling the tables in the ring and a good part of the stands.

Singh, who has legions of fans in Brampton and Ajax and even the GTA, was the main attraction and while he and Vrenozi put up an entertaining fight, the crowd didn’t get the knockout they wanted.

Chalk that down to Vrenozi’s superior defense, which also had its share of hard knocks, although the only time Singh was troubled was in the fourth, the only round won by the Albanian fighter. 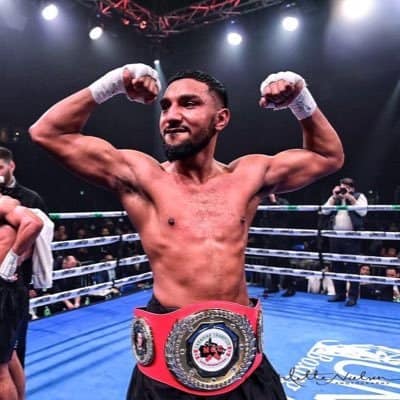 Cook, who four years ago fought Jaime Munguia for the WBO World Welterweight title in Las Vegas, improved to 23-2 with his victory over Horvath, who was up and ready for more when Porter declared him unable to Continue.

Cook said that even if Porter allowed the fight to continue, it was only a matter of time.

“I wanted to give everyone a good performance,” he told DAZN Boxing’s Michell Sturino in the ring, after the fight. “He was going to hurt himself. It just happened sooner rather than later. Cook added that he has “a lot of work to do” to improve for his next fight, which is expected to be in November.

Ricardo Brown, a former Jamaican Olympian in the heavyweight division, improved his perfect record to 5-0 with his second straight victory over a decidedly plump Mexican fighter, this time Carlos Carreon, the 5’7 Mexican heavyweight champion and 272 pounds. Brown, who is 6’7 and weighed 250, used Carreon as a punch bag for the first round to no avail before changing strategy and going for the body in the second. Both fighters started the second round swinging wildly before Brown got the knockout 11 seconds out with a hard right to the chin.

Brown’s manager DeWith Frazer, owner of the Mississauga boxing club where several of this weekend’s fighters train, said after the fight that Carreon (8-8) is much tougher than he was there. appears, calling him “cunning” and pointing out that it took a strategy to put Brown, whose previous fight was a first-round TKO against another portly Mexican fighter, in position to knock him out.

“He’s the Mexican heavyweight champion for a reason,” Frazer said.

Montreal’s Shakeel Phinn (22-3) won an entertaining fight at super middleweight with Mexican fighter Josue Perez, who showed a rock chin by lasting as long as he did. Phinn bloodied Perez’s nose in the first round, opened a cut on his eyebrow in the third and landed a hard right on the button in the fifth but Perez stayed on his feet.

But after a deadly combination of punches in the seventh, Perez went down. He struggled to his feet, but the fight was strangely allowed to continue and seconds later he came back down after another round of punches from Phinn. This time, he was told to stay down.

In a battle of fighters without a win, Jamaican Gregory Miller showed his class by beating Hamilton’s Drake Olchowecki in a match with a third-round TKO, while in the opening bout, Salar Gholami, who is from Iran but now fighting in Toronto, gave his large contingent of fans what they came for with a third-round TKO over Montreal’s Sylvera Louis for the vacant Canadian heavyweight title.

Louis is a former champion. 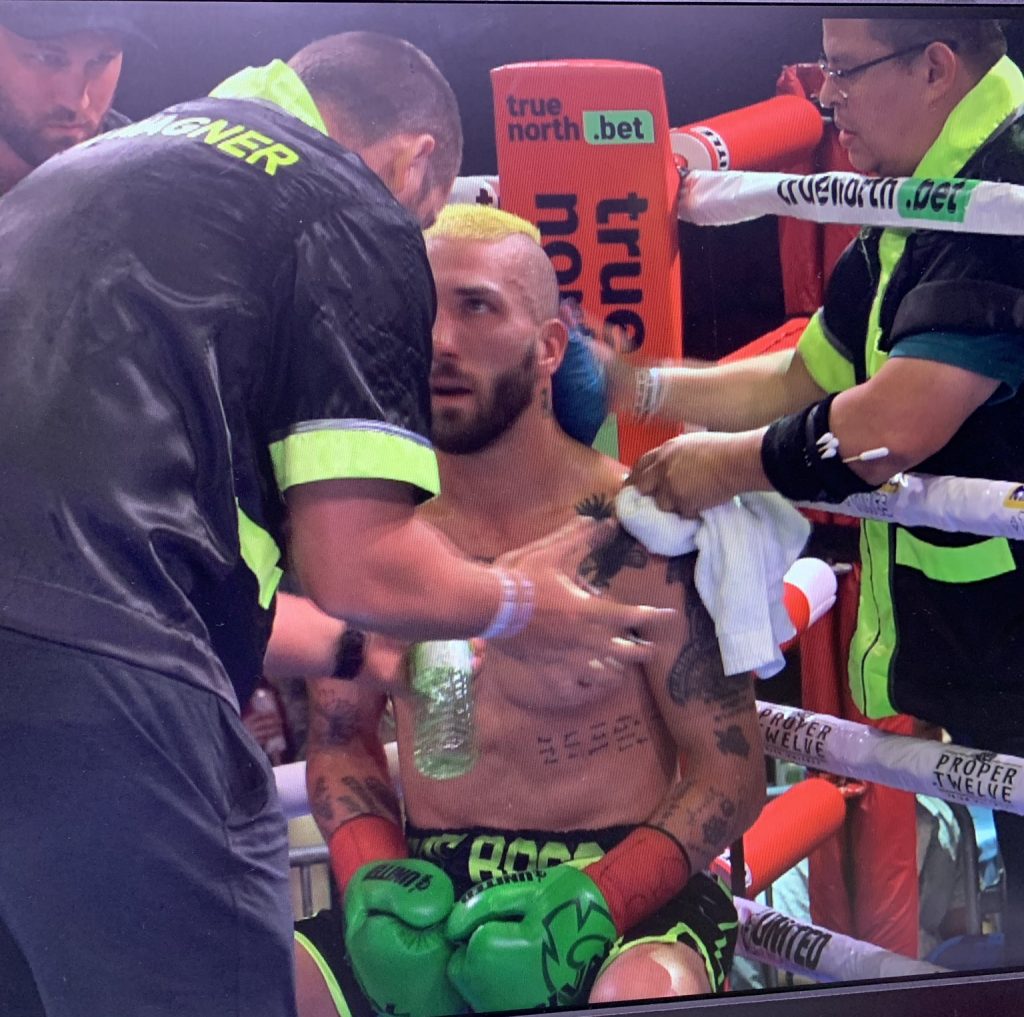 Wagner was slow to get into the fight and the fight was actually tied at four rounds apiece when Wagner started to land effective shots in the ninth; the first from a left hook and the second after a five-hit combination that forced the referee to step in and stop the fight.

Barrie’s “wonderful” Mark Smither and Brampton’s rising star Joshua Frazer (DeWith’s son) both maintained their unbeaten records on the card, although one had the easier path to victory. Smithers (9-0) had to go to the judge’s scorecards to win the IBF International Super Lightweight title with a unanimous decision over veteran Bolivian fighter Andy Almendras (15-11-1); while Frazer won his sixth straight fight to start his career in decisive fashion with a second-round knockout of Mexico’s Esteban Villalba, who has 43 fights under his belt.

In other bouts, Daniel Roach of Toronto (2-1-1) and Thad Buntsma of Oshawa (3-3-1) battled to a six-round draw; Melinda Watpool (another Fraser Academy fighter) was on the safe side of a four-round unanimous decision victory in her pro debut over Mexican super middleweight Silvia Barrarza; and Mehdi Abidi (Toronto, from Bangalore, India) won his pro debut with a second-round TKO over middleweight Scott McDonald of Ajax.

Subscribe now to receive our daily email of today’s top stories in your city!

Where to watch and stream Gad Gone Wild for free online