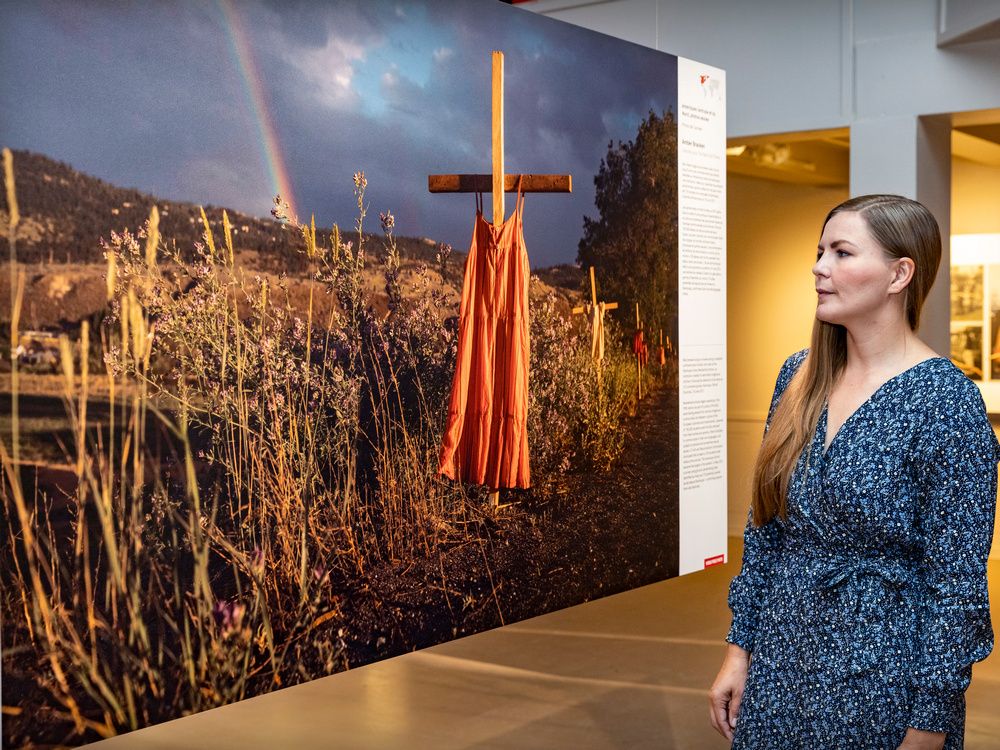 Amber Bracken was one of dozens of photographers from home and abroad who descended on the grounds of the former Kamloops Indian Residential School, outside Kamloops, British Columbia, in May 2021 to photograph the unthinkable – the devastating loss, trauma and tragedy of the discovery of the unidentified remains of 215 Indigenous children buried at the site.

The photograph she took, for The New York Times, won the 2022 World Press Photo of the Year award, making Bracken the fifth female photographer to claim the award since its inception in 1955. Titled Kamloops Residential School, it is the first winning image in the history of the award not to feature a person. It will be exhibited alongside other winning images from around the world, from Wednesday to October 2, during the 15th World Press Photo Montreal exhibition at Marché Bonsecours.

Having photographed Indigenous issues for some time – a photo she took at Standing Rock won the 2017 World Press Photo Award for Social Issues – Bracken still tries to “do justice” to the concerns of the communities she visits. . When she heard about a commemorative installation of crosses adorned with children’s clothing placed along the road leading to the school by members of the Tk’emlúps te Secwépemc First Nation, she knew she had found its subject.

“I was really touched by the symbolism and the fact that the installation gave form to the children,” Bracken told the Montreal Gazette.

From there it was all about how to pull it off. There was little room for cars to stop on the highway and it was difficult to get there on foot.

“It took a while to figure out how to get up (there),” she said. “I said to the night watchman, ‘I want to go on the freeway, but I don’t know how to do it without getting smoked by cars.’ He said, “I’ll show you the path the locals take. ”

They met at sunset, at the end of a rainy day.

“There was no guarantee it would be sunny,” Bracken said. “Still, it couldn’t hurt to try. He walked with me through the powwow grounds and across the fields past the Kamloops school.

When they got to the foot of the steep embankment leading to the road, the clouds began to part.

“That golden light comes out,” Bracken recalled. “By the time we hit the freeway, I was shooting and Matt said, ‘Look, there’s a rainbow.’ Then I focused on trying to get the composition right, to make sure I got the picture. I knew it was all there. I just had to not mess it up.

The resulting shot features a striking combination of evocative elements: a row of wooden crosses adorned with little red dresses, sticking out of the ground alongside the highway, surrounded by grasses glistening in the swirling daylight. fades, offset by dark clouds in the background and that fortuitous rainbow.

“The jury said it was the perfect photo,” said exhibition director Marika Cukrowski of the World Press Photo Foundation. “One of the jury members described it as something that sticks in your head.”

The ground floor of the exhibition features around 120 award-winning photos in various categories, capturing everything from the war in Ukraine and the stalking of tigers in India, to the protests in Thailand and the aftermath of schoolchildren kidnapped in Nigeria. .

On the mezzanine are the grand prize winning photos of the past 15 years; previewing Women, a new exhibition of photographs of Indigenous women by Anishinaabe-Quebec visual artist Caroline Monnet; and Claire, 107 ans by Justine Latour, a moving series of portraits of Montrealer Claire Sigouin, born in 1915.

IN BRIEF: World Press Photo Montreal Wednesday to Oct. 2 at Marché Bonsecours. Tickets are $15, $12 for students and seniors, free for 12 and under. For reservations and information, visit expo-wppmtl.ca